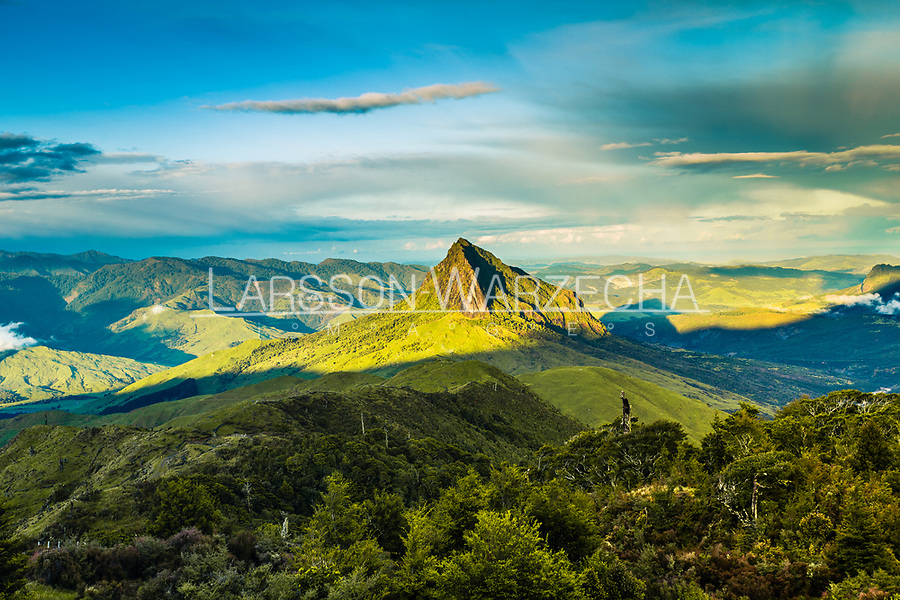 Views surrounding the Hikurangi Hut, Gisbourne District, North Island, New Zealand
Mount Hikurangi (or Te Ara ki Hikurangi in Māori) is a 1,752 m (5,748 ft) peak in the eastern corner of New Zealand's North Island, about 80 kilometres (50 mi) north of Gisborne, and 50 kilometres (31 mi) southwest of the East Cape Lighthouse. On a spur of the Raukumara Range in the Waiapu Valley, it is the North Island's highest non-volcanic peak. The peak is traditionally regarded as the first land in the world to catch the rays of the new day's sun, although this claim, like any such claim of its type, is open to interpretation. Certainly it is not true at any time of the year other than the Southern Hemisphere summer, as both Fiji and Tonga are to the east. In summer, however, because of the tilt of the Earth's axis, it does receive the sun's rays earlier than these places. It does not receive them earlier than the Chatham Islands (or, of course, Antarctica), however. This did not stop the mountain gaining world prominence in the celebrations for the new Millennium.
CAPTION SOURCE - Wikipedia
Lukasz Larsson Warzecha | www.LWimages.com | All Rights Reserved
WRITTEN PERMISSION FOR USAGE, WITH AGREEMENT ON RATES, MUST BE OBTAINED FROM 'LWimages Studio' PRIOR TO PUBLICATION. ANY UNAUTHORIZED USE IS A VIOLATION OF COPYRIGHT AND SUBJECT TO PENALTIES. Sample low-res files are for examination only.
Hikurangi Hut, Te Ara ki Hikurangi, Mount Hikurangi, New Zealand, North Island